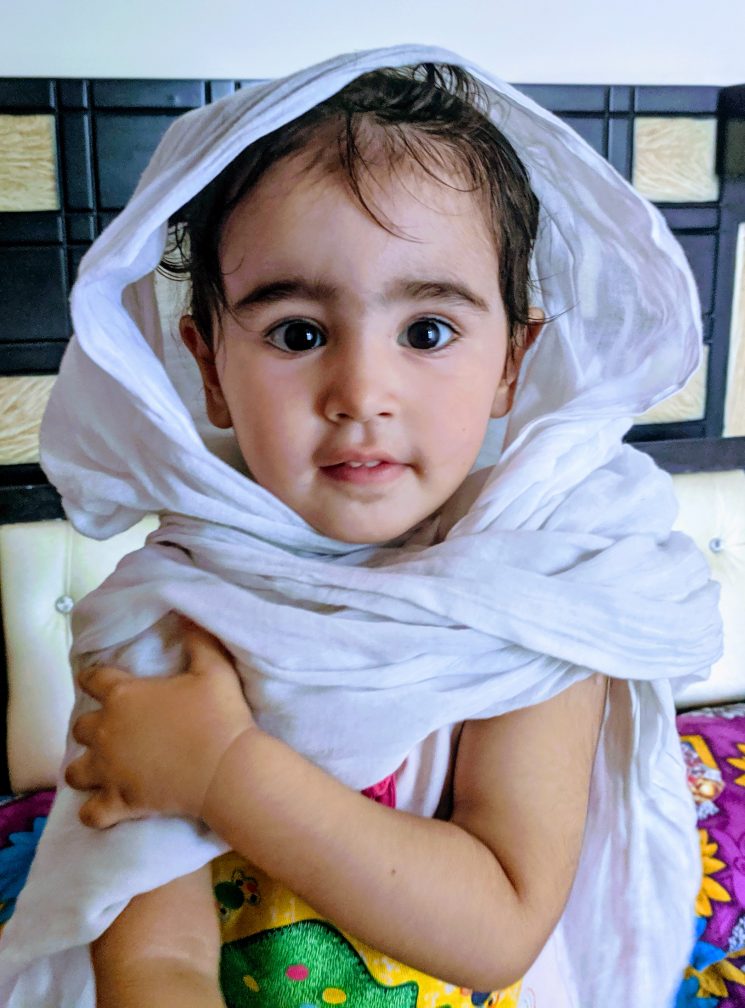 I told you about the instantaneous connection I felt with Mehtab when we first met. I had no idea that she was soon to consider me her aunt. Mehtab was about 18 months old when I arrived. While putting together pictures for this post, I realized how much she has grown!

I spent a lot of time with Mehtab and her mother, Jasmeen, during my first two months in India. Sometimes they were helping me run errands to get my living situation set up and sometimes we were just sitting together, sharing a meal and enjoying each others company.

One cold winter night, we went out walking in the street to stretch our legs. Jasmeen was talking to me about Punjabi culture and life in general. I would periodically reply by saying, “Yeah… yeah….”. Suddenly, Jasmeen interjected, “Hey, she is copying you!” I looked down and listened, Mehtab was repeatedly saying, “Ya, ya, ya, ya” as she toddled down the street.

A couple of days later the family pointed out that Mehtab, on her own initiative, had begun calling me Booah (Punjabi term for an aunt who is the father’s sister). Shortly thereafter, little Mehtab combined the two things she associated with me and she started calling me Booah Ya Ya, and so I was christened with my new name. If she is on her balcony and sees me walking down the street, her little voice will call out enthusiastically, “Booah Ya Ya!” and she will wave vigorously.

Early on we bonded while I showed her some fun things in life, like what clothes pegs are really for:

When I go over to visit, Mehtab often insists I remove my shoes or slippers. She has much more important need of them. Her cute monkey sandals don’t hold a candle to my old worn out shoes!😂

Jasmeen is the family tailor and I was able to pay her to make some suits for me. Mehtab likes to help out, whether it be by adding special horsie power to the kurta fabric or making sure measurements are correct.

One evening, I was walking home from a late lesson at Ustad Ji’s and came around the corner to see this little lady sporting a full dastar. She gave quite a “Waheguru Ji Ka Khalsa Waheguru Ji Ki Fateh!”

Mehtab has always loved wearing my chunis. I can’t say I make them look anywhere near as lovely as she does.

Mehtab loves music. She can sometimes hear me practicing from her home. Her Grandmother told me that she will hear me singing scales on aaaaahh and Mehtab will start singing along. Sometimes she has been outside my porch when I am practicing and I have heard her tiny voice singing. When she comes over to my apartment, she likes to play the harmonium. She is a good helper.

I was outside talking with Jasmeen last week and Mehtab wanted to go in my apartment. I let her inside and returned to her mother. After a little while, I thought I better go check and see what Mehtab was up to. My heart warmed at what I saw. I grabbed my phone and snapped this picture. She motioned and said she wanted me to come play music with her.

I have the best time talking with her in Punjabi as my vocabulary is growing. I will say something to her, she listens intently and she will nod her head or reply. It makes me happy that she can understand me. Yup, that’s right, I speak Punjabi like a two year old 😂

She has a yellow dog toy that I started referring to as Kuta Kaka (kuta means dog and kaka means baby in Punjabi). Recently, my Punjabi teacher said, “Well that means you are saying a baby is like a dog!” I laughed, “Well, the damage has been done. Mehtab loves calling the toy Kuta Kaka. It is too late to change the toy’s name!”

I have two necklaces that I always wear. One is a pendant of Guru Nanak and the other is made of three discs with Gurmukhi engraved on them. Mehtab has always loved looking at them. She will sit for five or ten minutes just holding them and staring at them. Sometimes she will pat her chest under her neck and make a little wimper. I ask her, “Tusin eh chahunday ho?” (You want this?) She nods in ascent. I think before I leave India, I should find one to give her.

She loves when I sing to her. She often says to me in Punjabi, “Booah, ga, ga!” (Booah, sing, sing!) Sometimes I sing things like Waheguru simran or when she is looking at my Nanak pendant, Dhan Baba Nanak.

I also teach her English children’s songs. I have been singing Twinkle Twinkle Little Star to her since I arrived. I made up hand gestures to go with it. At first she would only wiggle her fingers and stare at the rest, but recently she has been able to follow along with the motions for the whole song. It is the best to see her enjoy it!

Mehtab’s family has been teaching her the Sikh Mool Mantra. Periodically she will start reciting it and she likes to have you repeat after her, “Ek Ong Kar, Satanam, Karta Purkh, Nirbo, Nirvair, Akal Moorat, Ajunee Saibung, Guruprasad Jap, Aad Such Jugad Such Haibee Such Nanak Hosee Bhee Such.” (The Creator and Creation are One, True is that Name, the Creator is the Doer, Fearless, Revengeless, Deathless, Without Birth, Self Illumined- All is Contained Within, this is the Gift of the Guru – Meditate! True in the Beginning, True Throughout Time, True Now, Nanak says This will Always be True.) It is wonderful hearing her tiny voice trying to say the words (some more intelligible than others) with amazing enthusiasm.

A couple of times this summer, her family has invited me to sleep over. I was hesitant only because they are already five adults and Mehtab sleeping in one room; I didn’t think there would really be room for me. Electricity is expensive and unreliable in India. Most families have a power invertor/battery system installed in their homes to cope with the power outages. Because of the cost, most families run AC only in one room. It is quite common in the summer for a whole family to sleep together in one room that has AC.

They were insistent there would be room for me so I accepted. I am always up for an adventure. The bedroom is about 15 x 15 feet and has a king size bed plus a single cot. Normally, three adults sleep on the big bed, Mehtab and her mother share a cot and the grandfather sleeps on the floor. The first time I slept over, the uncle was not at home so I was given a cot to myself. The second time I shared a fold out bed with the Mata Ji.

I have heard stories of my grandmother growing up in a home with something like eight people sharing a room. Why do we automatically give this a negative connotation in the west? I know there will be times it is stressful, but there is equally a joy and beauty.

Indian families have amazingly close bonds and I have really enjoyed being included in the family experience. Every member of the family is unique, like a different facet on a jewel. As we sat around on the bed, cot and floor relaxing and enjoying each others company, I looked at the beautiful faces, young and old and reflected on how each person was so special and added to the family in an important, individual way. Being all together in that room, I felt a completeness.

There was a peaceful joy as we sat, some people listening to music on their phones with earbuds, some playing a game on their phone, some chatting together. Mehtab and I were playing silly games we made up and then cuddled for a while on the cot as she made my cotton shawl into a low tent. The light was eventually put out and everyone settled in for the night. Sure some people snore, but it was okay. There was a cozy feeling of bonding that you will never feel in America in a 3,000 square foot home where each person is closeted away in isolation.

The next day, I asked Jasmeen with a chuckle, “In the middle of the night, did Mehtab suddenly yell out ‘Ek Ong Kaaaar…!'” Jasmeen laughingly replied, “Yes!” Apparently they had quieted her down before she could recite the entire mantra. I was still asleep enough that I was wondering if it had really happened.

Having Mehtab (and her family) in my life has definitely been one of the best things about living here in India. She is a bright little soul and I am so grateful she made me her Booah Ya Ya.

The Music Plays On...