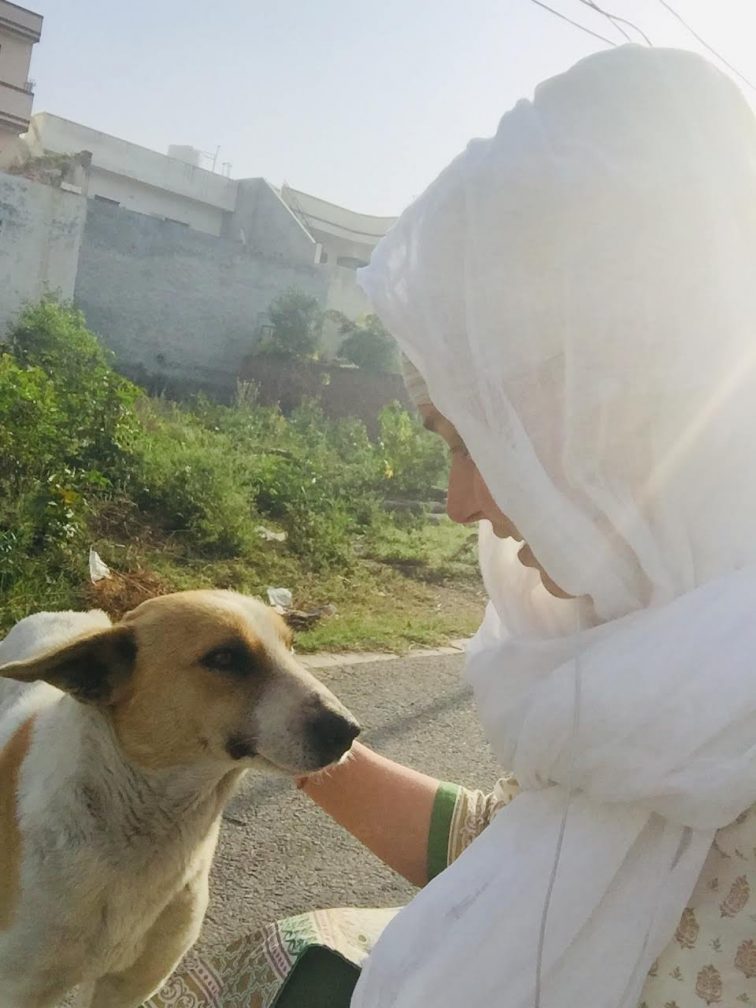 I was leaving Ustad Ji’s home after having my first lesson. The wood and iron gate that separates the courtyard from the street towers over me and takes a lot of effort to move. As I emerged into the street, I was startled to find my way blocked by two pigs. I stood in astonishment. Wow, pigs! At the time I wasn’t sure if it was a rare occurrence.

I have a soft heart for the creatures of the animal kingdom. A smile spread across my face as I realized my new neighborhood had such surprises in store.

It is no secret that in India you will see lots of animals wandering around in the cities. In my Chheharta neighborhood, pigs are the most frequently seen animal seconded by dogs. I have never seen the dogs be aggressive towards people, but they have a sort of distant look, they are not pets. There are not many cows here, so when they show up I take notice.

For some time in the spring, were were having our group classes at Siri Atma’s lovely home. On the way to her place one evening, I saw these beautiful cows grazing in an open lot:

Some simple moments are so unexpectedly beautiful, one can’t help but pause in gratitude.

Around this same time, during my daily walks, I noticed a dog that seemed more domesticated that the rest. Something in his aura just felt different. I would pass by him and acknowledge him energetically.

While talking on the phone with a friend in America one morning, I was induced to sit on the cement curb. Facing an expanse of greenery, I could enjoy the splendor of the sunrise while chatting. Suddenly, the familiar dog trotted up to me, tail wagging, a happy look on his face. I started to pet him and he leaned into my legs for more love. I decided to call him Kuta, the Punjabi word for dog. It was the first time I had touched an animal since arriving in India.

I had been missing my cat and there was something in the interaction with Kuta that went straight into my heart in a beautiful way. I felt healing and joy realizing he was a friend. Now when I am walking, he runs up to say hello.

There is one other friendly, resident dog in my neighborhood. When I first saw her, also (unimaginatively) named Kuta, I sensed she was heavily pregnant. She didn’t want much to do with anyone. She would lay in the road, looking miserable and ready to burst. She had a sweet, not wild look. After some time she disappeared, presumably to give birth. Some weeks later, she reappeared with her new troupe. I couldn’t help but laugh as I saw her puppies run up and latch on while she was still standing. She tried walking a few paces, then collapsed into the grass, surrendering to the puppies.

A week or two ago, I left Ustad Ji’s late one evening. I had remnant crumbs from some cake I had made for him and his family in a container. Kuta and her pups were laying in the grass outside his home. I slowly approached and turned the crumbs out for them. Kuta sniffed the crumbs, wagged her tail, then let the pups have all of them. She has been happy to see me ever since and I can’t help but love being able to pet those darling puppies!

My attention was caught one sunny, warm morning, by a small movement beside my porch. It was Dudoo (Punjabi for frog). This little guy was just a baby. A walk during nighttime revealed his bigger frog companions.

Best was watching him try to skedaddle across the slippery stone:

When I was setting up my apartment, I had the intuitive feeling that airtight food storage would be particularly important once the warm weather set in. I was right. One unexpected roommate who showed up with the warming temperatures was the chipkali (gecko). An involuntary Aaaaaagh! escaped me at 3 am when I went in my kitchen. I didn’t expect to see a face looking at me from the dish drainer.

For a while he was spending his days behind a picture of Guru Nanak. But I kept peeking at him so he finally decamped. I don’t mind sharing my apartment with these little guys; I figure they are eating creepy crawlies and mosquitoes.

It is very rare to see cows near my apartment, but one day, there she was. I paused to appreciate her clumsy grazing on the neighbor’s landscaping. I started to pass by, but then turned back. She had a rope on her so I knew she wasn’t wild, she was someone’s milk cow. She had a gentle energy and seemed like she would welcome contact. I reached my hand out tentatively and smiled as she leaned her head into my touch and quietly accepted the love.

A small drama played out one morning as a couple of wild dogs were hunting a baby piglet. I and some neighbors stood captivated as the wildlife drama played out before us. The mother pig had several of her babies gathered down the road. She left them and doubled back to where the action was taking place.

Two large dogs had separated a small piglet from the family and were cornering it in a dead end lot. Adrenaline filled the air as I watched the dogs go in for the kill. The piglet ran from it’s cover and was caught by one of the dogs. Squeals and a scuffle ensued, but then the little fella mustered enough force to spring away and run off to safety. The mother swooped in and began vocalizing her displeasure to the dogs.

I was amazed that with how many babies she had, she knew that one was in danger and her attention was on that until her brood was intact again.

I have not seen many cats in India. The ones I have seen are all skittish, so I haven’t been able to satiate my longing for kitty love. The cats here all seem to be short haired and remind me of Egyptian depictions of cats. Siri Atma sent me this beautiful picture of the cat that frequented her garden:

The fattest, largest hummingbirds I have ever seen in my life live here. Perhaps they are living off mango nectar? Lol. I did a double take as I watched the characteristic flight patterns and wing beat on the large body that seemed somewhat reluctant to follow along.

There’s quite a healthy bat population here. I really enjoy watching them feeding at dawn and dusk. Not long ago, I was walking one evening with Ustad Ji on his roof terrace, after my lesson. I asked him what bats were called in Punjabi. He was puzzled and I said, “These different ones that come out at night. They are not birds.” I said next time I saw one I would point it out. We continued walking for some time, then suddenly, Ustad Ji burst out, “Amanjot! This one?” I looked over just in time to see a bat flying very close.

“And it has a different mouth?” Ustad Ji questioned.

“They are chamgidr. People are not liking them.”

“Because they are afraid? Bats are good. They eat a lot of mosquitoes.”

Last but not least, I will share with you the story of the largest surprise animal experience in my neighborhood. It was the end of a hot, long day. I had crossed the busy eight lane road to go to the Easy Day grocery store for supplies. The store was crowded and my nerves were shot as the oppressive stale heat, the noise of the store and pushing bodies closed in around me. Standing in the check out line, feeling like a zombie, I stared blankly out the plate glass window behind the registers.

Suddenly my jaw dropped as I saw the biggest elephant I have ever seen in my life marching down the busy road alongside the regular traffic. It had a huge pile of leafy branches piled on its back – the pile seemed to rival the elephant in size. Atop the load was an Indian man. No one else in the store seemed to notice or care. I left the shop with the beautiful image of the elephant in my mind.

Descending the steps, I paused as something moved below. Double take. What? Is that a…? I continued on slowly and peeked at bottom stair. Sure enough, there was a 3″ long, fat cockroach, zooming along the step. Yes indeed, I thought to myself, I live in India! Elephants AND giant cockroaches!

Unfortunately, I didn’t get any photos of my elephant encounter, but about a week later, my friend Keeratpal had her own encounter with one on that same road. She has graciously allowed me to share her video with you here. Thank you Keeratpal!