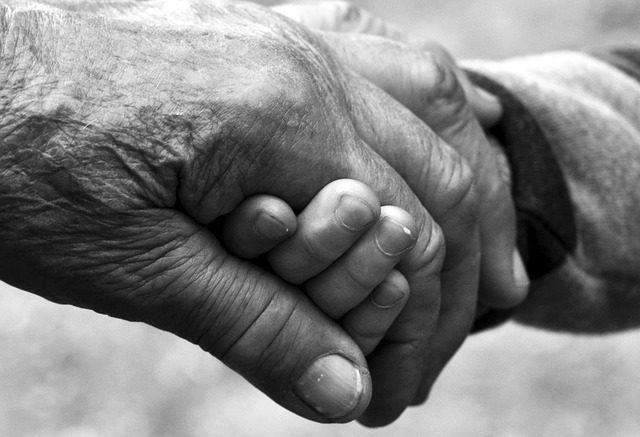 In the last post, I told you about my first impressions of India. For some time after arriving, I was forced to stay close to home until I knew the lay of the land, where it was safe to go alone and how to get to places for basic needs like food. I had to exercise patience in waiting for my new family to have time to show me around. Pacing my rooftop terrace on the cold winter afternoons, I couldn’t help feeling like I had become a prisoner. Thankfully, as time passed, the “end of the world” sensations morphed into something quite different and my prison dissolved.

Weeks and months have passed, allowing me to learn about, explore and observe my new little world. I can easily move about to take care of my daily needs as well as visit local Gurdwaras or Darbar Sahib (the Golden Temple). I know a route in my neighborhood that is safe for walking alone. Freedom has returned!

The more I came to know my new home, a juxtaposition of two worlds became apparent. A man in a business suit, riding his scooter to work would be followed by a man in traditional Punjabi clothing, driving a horse cart. Or if wedding festivities were taking place, you might see a princely attired groom, atop a horse accompanied by a full band, complete with drums and bagpipes. I can go to the Easy Day supermarket with its tidy, modern aisles to buy toilet paper and then walk down the street to the bazaar to buy fruits and vegetables from wooden horse drawn carts, laden with fresh produce – a veritable 365 days a year farmers market, old style!

What came to mind were anime worlds, such as found in Studio Ghibli films, which sometimes contain a curious mixture of technology amongst almost Victorian surroundings, creating a world that has aspects of technological advancement, yet set back in time.

I left Ustad Ji’s after the morning lesson one day and began the walk home in the cold, harsh brightness of the winter sun. I stopped in wonder at the timeless scene playing out before me. In an empty lot, overgrown with vegetation, surrounded by modern homes, a turbaned, bearded man dressed in traditional clothing and carrying a large staff was traversing with his herd of goats. It looked like a scene from the Old Testament was crossing the suburban neighborhood. Now that is something you will never see in America!

I have always had a fascination about living in the past. I even used to sew my own historic clothing. Here is a window into that distant past:

Yes, India in many ways feels like I have traveled back in time. I really love that.

One other thing kept reminding me of Studio Ghibli. Anyone who has seen their films will recall the lovable, unique old lady characters Miyazaki San is so fantastic at bringing to life such as old Sophie in Howl’s Moving Castle or the Grandmother in My Neighbor Totoro. I realized soon after my arrival that the Nani Ji of my new family was just such a lovable soul.

I began to think of her as the “Very Ghibli Grandmother”. I delighted in watching broadcasts of live kirtan with her, trying to talk with her in my very limited Punjabi or just sitting near her. Our smiles often saying more than our words allowed.

She was only staying a short time while her son’s home was being remodeled. They had thoughtfully sent her to stay with Jasmeen’s family for three months until the messy work could be completed.

Indian families function quite differently from American families; extended families live together and care for each other as a unit. Elderly grandparents are able to rest if needed, help out with household chores, care for and bond with their grandchildren. The children are learning from and valuing their relationship with the grandparents. Generally, children live at home until marriage. When a son is married, his wife comes to live with him and his parents and perhaps other siblings still at home.

While these dynamics have their own inherent challenges, they also have a lot of value and beauty that is lost in the western style of living “every man for himself”.


American culture does not give much value to elders and the contributions they bring to our lives. In America, it is the norm for elderly parents and grandparents to be farmed off to care facilities. Perhaps they are visited by family. Sadly, many times they are not. It is very rare to find the elderly living with their families. This is something that has always troubled me.

What a joy it was to see Nani Ji, in spite of limited mobility, enjoying an engaging life as an integral and valued member of the family. To me that is priceless.

Before she returned to her son’s home in Ludhiana, I was able to experience her joy, love, integrity and grace. It was a sad day for us all when she left for her other home. I hope I have the opportunity of visiting her again someday.

In the meantime, my Studio Ghibli life continues. My most recent memory snapshot came while standing on a corner under a street light at 4 am with my friend, and fellow student, Piara Ravi Kaur. We were waiting for her taxi to arrive; the first step in her long journey home to Poland. As we stood in the blazing circle of light, surrounded by inky darkness in the silence and stillness of the Amrit Vela, I couldn’t help but feel we were living a moment from My Neighbor Totoro. Piara Ravi and I were waiting, as bats hovered overhead, for her Cat Bus to arrive! Meeeeoooowwww!

Oh No! What Have I Done? A Snapshot of My First Week in India

Flower (and Tree!) Power to the Rescue